On the 28th Iyar  about 52 years ago the Israeli army entered the Old City of Jerusalem and reestablished a Jewish presence in Judaism’s holiest city.

Since that fateful day, the 28th of Iyar has been known as ‘Yom Yerushalayim’ (literally, ‘Jerusalem Day’) and it is a public holiday in Israel.

Yom Yerushalayim is celebrated in many different ways. Some people use the day to learn more about the history and significance of Jerusalem, while others tell stories about the heroic and miraculous battles that occurred during the ‘Six-day war’. Here are 6 different ideas that you and your students may wish to explore on Yom Yerushalayim:

We take it for granted that a key objective of the Israeli soldiers fighting in the Six Day War was to take over Jerusalem – but this is not so. The Six Day War was fraught with great risks, and even Defense Minister Moshe Dayan was very reluctant to endanger the lives of his soldiers in the difficult battles that would be necessary in a fight for Jerusalem. However, when it became apparent that this was a unique opportunity to reunify Jerusalem, both Prime Minister Eshkol and Defense Minister Dayan realized that they had to seize the day and act fast and they put into practice the Latin teaching of ‘Carpe Diem - seize the day’. Sometimes our greatest opportunities are fleeting, and whether we realize them or not depends entirely on whether we seize the day. Both Levi Eshkol & Moshe Dayan did so, and we are forever grateful to them, and to the soldiers who fought for Jerusalem.

To learn more about the decisions taken within the 6 day war, click here.

2) THE TEMPLE MOUNT IS IN OUR HANDS

When Lieutenant General Mordechai (“Motta”) Gur reached the Temple Mount and proclaimed ‘Har Habayit Beyadeinu – The Temple Mount is in our hands’, it was clear that something extraordinary had occurred. However, as the journalist, Eli Landau observed, even this declaration was significant because Lieutenant General Gur did not say ‘The Temple Mount is in MY hands’, even though in theory this was correct. Instead, by using the phrase ‘OUR hands’, he – like Jerusalem itself – sought to unify the entire Jewish people. While many Jews don’t live in Jerusalem, Jerusalem is the city of all Jews.

To listen to a recording of Motta Gur saying these famous words, click here.

One of the best-known photographs of the Six Day War shows Rabbi Shlomo Goren leading Israeli soldiers in prayer at the Kotel, and this is a particularly powerful image given the fact that the soldiers had just been involved in difficult fighting. One might have expected these soldiers – who must have been exhausted – to simply want to rest, but they all recognized the need to thank G-d for the miracles that they had experienced. What we learn from here is that there are times when thanking G-d for the gifts He has given us takes priority over our own wants and needs.

To see pictures of the Israeli soldiers praying at the Kotel, click here.

At the same time, Rabbi Goren did not just lead the soldiers in celebratory prayers, and once the initial joy and appreciation was expressed he led a memorial service for all those soldiers who died in the battles of the Six Day War and especially in the battle for Jerusalem. For Rabbi Goren, the blessing of Jerusalem did not replace the human loss of life that it took for its capture.

To listen to the memorial prayers recited by Rabbi Goren at the Kotel, click here.

Since the destruction of the Second Temple the Jewish people have been in exile. But despite this Jews have continued to think and pray about Jerusalem. Forgetting occurs when we fail to establish regular reminders for ourselves, and remembering occurs when we have a strategy for constantly thinking about the things that matter most. The fact that the Jewish people never forgot about Jerusalem shows us that if we care about an idea, we’ll try and find ways to keep it ever present in our consciousness.

To listen to a beautiful rendition of the words ‘If I forget you Jerusalem’ by Yaakov Schweky, click here.

Even though the Jewish people prayed and hoped to return to Jerusalem, there were many obstacles in their way, and while Jews may have hoped of returning to Jerusalem, they may have regarded this as an unrealizable dream. The battle for Jerusalem and the reestablishment of a Jewish presence in the Old City serves as a powerful reminder that we must never give up on our dreams, and if we work hard enough, our dreams will become a reality.

To read Tehillim (Psalm) 126 which describes the return to Jerusalem with the words ‘we were like dreamers’, click here.

To create games on any of these topics or to look at other games that have been created about Yom Yerushalayim, download Ji Tap today! 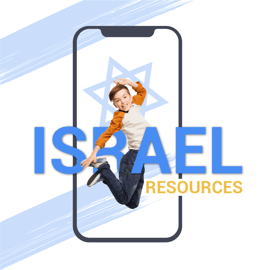