I’m getting really bad at the prep for chag ahead lark… I missed the chance to get Purim costumes delivered from Amazon, won’t risk it with Aliexpress and I’m toying with bad pun homemade costumes that’ll put my kids in therapy…

So, Purim in a flash. We were nearly destroyed; it turned out alright after the fight, let’s eat? Not those basics?

Ah you mean four mitzvoth basics; you’ve got to get done by the end of the day?

We hear the megillah twice. Send parcels of food, at least one. Donate to charity, to at least two people or two amounts and sit down for a meal.

I really like that our family’s Purim fun kicks off with the shul’s post-megilla activity. Firstly, it means you’ve done something, you’ve socialised, and the pressure is OFF. Yes, even though that isn’t one of the mitzvot of the day, it has become important.  It’s a space and place to see friends who don’t turn up to shul…like me, and see, meet and greet in a different context.

Secondly, Purim seems like the quintessential communal holiday, the danger Esther and Mordechai stymied successfully threatened everyone, crossing 127 provinces. They were determined to fight it together. It seems fitting that the reading of the megillah then sending food parcels and money to the needy, caring about our community are the obligations. It’s also one of those occasions where teenagers and, ahem, children of all ages can volunteer their time.

So, will it be a magic show or puzzles at shul this year? And who will win the best costume? I’m telling you after Mashiach comes, that’ll the fifth mitzvah of the day.

I’ll be honest, I’d prefer one megillah reading and the second can be animation or the documentary but what can you do. They’re not going to ask me.

The meal is what you make of it too; you can order pizza or picnic in the park. Or get together with people and everyone brings something. That’s the entertainment, as well as the food.

The amount you give to Tzedaka is flexible.  Essentially, you give Tzedaka to two people but since we mostly give via community Rabbis these days, that’s your calculation. You should be blessed that you should be able to give more than you thought you could.

If there’s one thing about Purim, it’s that there never seems to be enough time. Before you know it the day is OVER. And you’re left with happy Kodak moments of astronaut princesses and snoring superheroes planning their next costumes.

Your complete free guide to Purim! 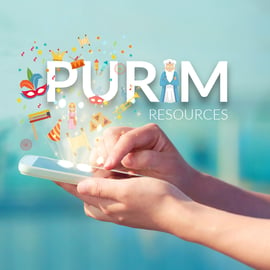