Lag BaOmer is the semi holiday many Jews don’t know about. It is literally the the 33rd day of Sfirat HaOmer, the counting of the Omer (Vayikra 23:15-16) as the numerical value of lag, lamed ל plus gimmel ג is 33). It’s always the 18th day of the Hebrew month Iyar.

The Jews were commanded to count 49 days between the Pesach Omer offering (an omer-measure of new barley that meant we could then partake of the new harvest) until the wheat offering was brought to the Temple on Shavuot, which signaled the start of the wheat harvest. On Shavuot we also commemorate receiving the Torah.

The focus these days is not harvest and travel to the Temple, but rather, opportunity for spiritual improvement, to consciously build ourselves up day by day as we renew our commitment to receiving the Torah. Today, the Omer itself is also a mourning period; primarily due to the Bar Kochba revolt in 132 AD. We are told that 24,000 students of Rabbi Akiva died during the Omer and “stopped dying” on Lag BaOmer. As with the destruction of the Temple 65 years earlier, the sages gave reasons for this plague, specifically:

It was said that R. Akiva had twelve thousand pairs of disciples, from Gabata to Antipatris; and all of them died at the same time because they did not treat each other with respect. (Yevamot 62b)

There are also multiple mystical legends surrounding Rabbi Shimon bar Yochai, one of Rabbi Akiva’s five main disciples, who ensured the transmission of Torah. He also delved deep into Torah mysticism in the years he fled from harsh Roman decrees. It is said that Lag BaOmer is his yartzeit, the anniversary of his death, traditionally, also the day when he revealed kabbalistic secrets to his students, bringing the light of Torah to the world. This calendric association generated Lag BaOmer customs like travelling to his tomb in Meron in the north of Israel  or lighting bonfires countrywide; playing with bows and arrows, all starting 1400 years after his death with the settlement of Safed’s kabbalists in the 16th Century. The bow and arrow custom is interesting in that it apparently commemorates the idea that during R’ Shimon Bar Yochai’s lifetime, a rainbow--the shape of a bow--was never see in the sky; as the rainbow that symbolizes God’s promise and protection would have been been unnecessary due to R’ Shimon’s merit standing as defence. If that sounds just a little fantastic, as why use something so military in nature to symbolize someone’s goodness, it could be intended to recall Bar Kockba’s revolt against the Romans. It could be said that this revolt was led by R’ Akiva, as said before,R’ Shimon’s main teacher.

Thus Lag BaOmer customs echo the complicated evolution of this period; all mourning customs are lifted for Lag Baomer: wedding parties take place; some even wait months to cut their three-year-old child’s hair on this day specifically. Musical instruments come out for a kumsitz, barbecue or wedding. Families go on day trips and youth movements go out to forests and hills. Chabad lead parades across the Diaspora displaying Jewish unity and pride while Chasidic Rabbis conduct customary meals where their chassidim sing and discuss Rabbi Shimon’s teachings into the night.

As we parade, break bread together, roast marshmallows, or barbecue, perhaps we are seeing prophecy happen in real time. The Talmud recounts a surprising story of Rabbi Akiva, the man who was brutally killed for teaching his Torah and the one who lost so many students to the ravages of war and plague; one of the reasons for Lag BaOmer.  Rabbi Akiva sees foxes running over the destroyed site of the Beit Hamikdash. When asked why he was so happy he responded, just as this part of the prophecy came true, so will the rest happen; children will once again play in the streets of Jerusalem. And they do.

Your free guide for children to Lag Ba'omer! 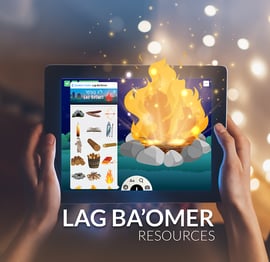