The Heart Attack of Tisha B'av

Many thinkers, artists and poets spanning millennia have tried to depict the importance, splendor and spirituality of Jerusalem, with maps such as that produced by 16th century Heinrich Bunting placing Jerusalem at the centre of the world.

While Bunting’s map was original his idea was not, as we find the 5th century Midrash Tanhuma (Kedoshim 10) also describing Israel at the centre of the world and Jerusalem at its centre. However, the Midrash does not end there, as it continues by remarking how the Temple stood at the centre of Jerusalem, and the Holy of Holies at its centre.

Basing himself on this imagery the 16th century Rabbi Judah Loew of Prague - otherwise known as the Maharal of Prague - describes the Temple as the heart of the world that provides life to the rest of the world - just like a heart provides blood to the rest of the body (Gevurot Hashem Ch. 71). Yet continuing the theme of the Maharal, on two occasions the Jewish people suffered a massive ‘heart attack’ as a result of the destruction of the Temple - first in 586BCE by the Babylonians, and then in 70CE by the Romans. Significantly, both Temples were destroyed on the same date - the 9th of Av.

Like a heart attack, the impact of their destruction was immediate and debilitating, and like a heart attack, our national body and soul has been weakened and compromised ever since. This is why the 9th of Av is Judaism’s saddest day during which many Jews spend the day fasting and mourning.

However, the fasting and mourning of the 9th of Av is not intended to further sadden or weaken. Instead, it is a form of therapy that helps us acknowledge what happened to us as a people, while also inspiring us to make positive improvements to our lives - just like someone who has suffered a heart attack is encouraged to make lifestyle changes to help them heal and regain their strength.

At the conclusion of the reading of Eichah (Lamentations) on the 9th of Av we repeat the words ‘renew our days of old’. In doing so, Jews express their hope for the realization of the prophetic vision that Jerusalem will return to being the centre of our world, with the Temple at its centre. And when that vision is realized, the heart of the Jewish people will truly be healed. 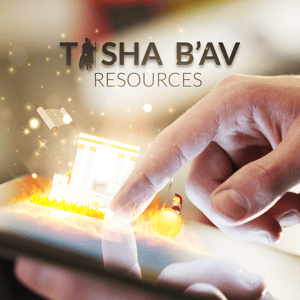