Shavuot is definitely a joyous festival. If you made it through the entire omer without forgetting to count your way to the end, then you are probably cheerier than most for the achievement.

What is Shavuot you ask…literally, it’s the Festival of Weeks, and there are seven weeks between Pesach and Shavuot; both of them considered one of the Shalosh Regalim, the pilgrim festivals, occasions for our ancestors to take a long trek from wherever they lived to spend the chag in Jerusalem.

The Talmud even calls Shavuot, Atzeret, indicating that this day concludes the Pesach season. As on Pesach, the Jews brought a barley offering and on Shavuot, a higher-level wheat offering, seemingly concluding the idea of spirituality in harvest, of building up to something bigger or better.

That makes sense on a harvest level, and the fact that people also work on themselves during these weeks. Shavuot was an opportunity for people to bring their Bikkurim, the first fruits of the harvest, to the Temple in Jerusalem. In an agrarian society this was an exciting, seasonal turning point. And we’re told that as they passed through towns and entered the capital they passed musical parades.

When they finally presented the bikkurim to the Cohen, they enacted a ceremony that recounts the history of our people, our slavery in Egypt, our redemption, and finally, our entry into the land of Israel. The text goes on to express gratitude for God’s guidance and our bounty, inexorably tying the harvest to our national story via Pesach.

While it might seem odd to link harvests and the Exodus, springtime is traditionally full of hope when people would sign contracts, marriage, and national or otherwise, this is the best time to do that. When we became a nation.

How is Shavuot done?

Well, obviously we go to shul and eat. Right? Except this time we didn’t conquer, defeat or throw any tyrants off our backs. Although if it’s the conclusion of Pesach we can probably say, yeah we threw Pharoah and slavery off our backs and got rid of our slavery mentality.

Shavuot doesn’t have any mitzvoth of the day but we do have many customs. Some communities read the poem Akdamut emphasizing God’s greatness and some read a poem called Azharot; positive commandments on the first day and negative on the second.

The Book of Ruth is read because her choice to join the Jewish people and accept the Torah and its commandments mirrors how we should renew our “marriage” vows with God every year.

It’s also customary to stay up all night learning Torah, preparing ourselves to accept the Torah the next day. This is called Tikkun Leil Shavuot, so called because a tikkun is a fix and legend has it that our ancestors overslept that morning… The Arizal formulated a specific text in the 16th Century because the custom to do it at all started when R’ Yosef Caro, author of the Shulchan Aruch, invited R’ Shlomo Halevi Alkabetz and some other Rabbinic friends to hold an all-night study group which they prepared for three days in advance mimicking the preparation the Jews enacted three days before Matan Torah, the giving of the Torah. Today, in Jerusalem, thousands of people conclude their overnight study marathon by walking to the Kotel to join the Shacharit minyan at sunrise. This actually began in 1967 as the Israeli army captured the Old City just one week before Shavuot! Over 200,000 Jews came to pray at the Kotel, they hadn’t seen it up close since 1948!

What is Shavuot without our traditional yummy foods, right? Some say we do this because before receiving the Torah we were not duty-bound to keep the laws of milk and meat. Others say it’s because milk is symbolic of Torah which nourishes our nation just as a baby grows and thrives with only milk for his formative months. King Shlomo even compared the Torah to milk in Shir Hashirim: Like honey and milk, it lies under your Tongue; a nice juxtaposition to staying up all night with coffee and cheesecake. Finally, the Tehillim (psalms) call Har Sinai, Har Gavnunim, mountain of splendid peaks, which does sound a bit like gevinah, the Hebrew for cheesy. Cheesy explanations but I don’t mind as long as I get a slice.

Whatever Shavuot is, it’s the favorite chag for many who like a good social and a shiur.

Your free downloadable e-Book to learning about Shavuot! 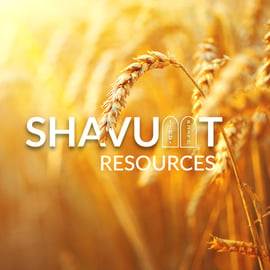