We sat down with Benjamin Levine to find out more about the amazing cycle challenge he is doing and why he is choosing to donate the money raised to Jewish Interactive!

What is your involvement currently with Jewish Interactive?

I'm a proud trustee. Having watched this little charity grow - in people, countries active in, vision, children it has connected with - I find it incredible to step back and admire the progress that has been made. So I sit on a board with talented and insightful people who are aiding the charity to fulfill its full potential.

How did you first hear about and get involved with Jewish Interactive?

I completed a Jewish leadership course a number of years ago the end of which was a job fair for roles with Jewish charities. Ji stood out amongst the other worthwhile causes. It had a vision I hadn't seen in other charities - the other charities were already at their full potential whilst Ji was (and is still!) ramping up. I also have a technical background and wanted to try and use it in a charity context. I'm also passionate about Jewish education. Ji was the perfect fit for me - here was a charity trying to develop its own apps and use them for Jewish education! What a find!

What do you do currently?

I'm a patent agent for a technology company. My job combines technical discussions with engineers and data scientists with the legal system. I sit on the boundary between the two, translating specific engineering concepts into generalized legal ones. I really enjoy it, especially because I'm at a company developing some very interesting and exciting robotic systems.

Please can you tell us a little more about this cycle challenge that you are taking part of in August?

I'm taking part in RideLondon, a 100 mile cycle challenge around London. It was established following the London 2012 Olympic Games and aims to create a new world-class event for cycling, that will rival London's most iconic sporting events such as the London Marathon and the Wimbledon Championships. Over 25,000 amateur cyclists start in Queen Elizabeth Olympic Park, then cycle through the capital and onto Surrey's country roads and the Surrey Hills before a finish on The Mall in central London. Many of the riders are sponsored for charities: £12.5 million was raised for charity in 2017.

Why have you chosen to raise money specifically for Ji?

Ji is going through an enormous growth phase. Much like a start-up which is ramping up its offering.From being a small charity primarily based in the UK, we've launched our platform which allows children to not only use and play Apps, but also create their own Apps with an easy to use interface. This has been extraordinarily well received around the world, so much so that we've set up offices on the East and West Coasts of the USA to promote it. Ji needs a lot of help to continue its world domination and I hope my fundraising can support those efforts in some way.

What are your thoughts on Educational Technology?

What is one thing you wish more people understood about Jewish Education?

That it can be gripping and exciting! A lot of us have suffered from poorly taught and resourced Jewish Education in the past, especially when we were younger. It puts us off for life. Ji is out there making Jewish Education gripping and exciting for young people - it's the best way to get them excited about learning at an early age and I'm sure it will remain so as they grow. 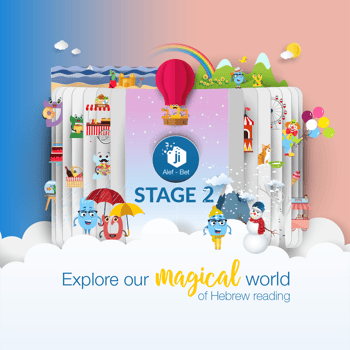