Operating in South Africa, the United States and the United Kingdom, Jewish Interactive aims to instill a love and knowledge of Judaism in children, whether they are part of a formal Jewish Education framework, such as a Jewish day school or Cheder, or not affiliated at all which includes around 800 000 children in the United States who are not in any formal Jewish educational framework.

In a major joint leadership training day last month with Jewish Interactive, the New York based Centre for Initiatives in Jewish Education and Apple at Apple headquarters in New York, 50 school principals joined Newfield and her father, Martin Glatt, whose foundation has sponsored the project, to consider the future of Jewish Education.

The event followed two similar launches at Apple headquarters in London and was the first of a nationwide campaign to inspire Jewish day schools in the US to bring their Jewish classrooms up to date, using the latest technology. More than 200 school teachers in the US from over 40 schools have already been trained in the new platform.

In South Africa, Ji approached schools with Jewish learners throughout the country to promote the app. In 2010, the original Shabbat Interactive app was made available to 5 000 Jewish school children. It was favorably received.

The Ji app - or now, more correctly, series of apps - has been introduced to schools in South Africa, with many using it in their computer laboratories, making it available to all the pupils.

Workshops were held around the country. The schools include the Jewish day schools, from Herzlia in Cape Town to Yeshiva College and Torah Academy in Johannesburg, and even Jewish schools in East London and Umhlanga. Among the non-Jewish schools are Fairways in Durban and Crawford College and Bella Vista in Johannesburg - all have Jewish pupils. There have also been downloads from the Sharon School in Harare.

Apart from educational material through other websites, such as the Jewish text sire Sefaria, Ji provides fun games from the app store, enabling young people - and adults too - to play in an enjoyable Jewish environment. The latest app in the range is Ji Tap, which includes a social platform where Jewish Studies teachers and learners can create, play and share their own gaming apps, with insights, data and inbuilt assessment tools.

Ji now has a team of 10 in the three countries. In Israel, apart from Newfield, who now lives there, the office in Modi'in employs three people, including a programmer and a rabbi. The CEO, Chana Kanzen is based in London, where there are also two fulltime trainers. Ossendryver, the chief operating officer, and Rachel Silke, the graphic artist, are based in Johannesburg, where they are responsible for graphics and production. 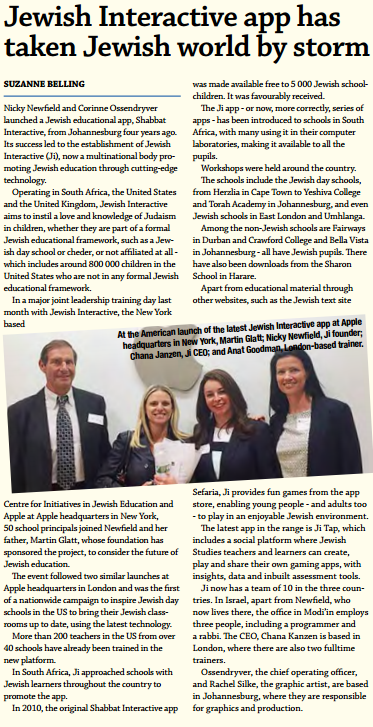 Learn all about Chanukah with your children and students! Download our FREE Chanukah booklets packed with information, games, activities and more!