Jewish Interactive - How it began and where it is now

It all started with a CD on Shabbat, made by a South African team led by Nicky Newfield - ten years ago.  It impressed Chana Kanzen, a teacher in an elementary Jewish school in London, who was frustrated by the current methods of teaching Hebrew,  that she felt were antiquated and lacking in non-didactic information on Jewish life and the history of Israel.

Together, the two young women established a charity with the aim of creating an innovative platform, Jewish Interactive, dedicated to teaching the language and the basics of Jewish tradition and religion in a fun, stimulating, interactive way.  Then came Covid with distance learning, and the site literally exploded, doubling visitors in one year (from 220,000 to 485,000 in 106 countries) and the number of online sessions (from 350,000 to 760,000). Half a million children around the world have had access to the platform.

Armed with technological and educational expertise, Chana, who took over the reins of Ji in 2016, has assembled a group of young creatives (the animations are delightful) and, inspired by the most cutting-edge experiences in apps and online games, has created an interactive and customizable, open source website (in the sense that everyone can contribute). This is aimed at schools, teachers and Jewish communities as well as families who wish to facilitate the Jewish education of their children. The target audience is children between the ages of 3 and 13 years, but there are also many adults who use the platform to  learning Hebrew while having fun - including myself. Users are not only Jews from the diaspora: in Israel the site is very popular, even by Arab families. In fact, Israeli Arab children start learning Hebrew at school at the age of seven, as a second language, but many parents want them to start earlier, in order to better fit into the country in which they live.

Chana Kanzen is also a brilliant entrepreneur, who has been able to find economic balance through subscriptions (some of the lessons are free, others for a fee) and the support of Jewish institutions all over the world, so much so that her site has been translated into a dozen languages and recently received a $ 2.5 million grant to renew the digital platform. "Living in England, I am aware of the ignorance of Jewish children about their cultural heritage on a daily basis.  Very many children of mixed marriages, or of secular parents who are not observant, do not have the opportunity to study our language and our culture” explains Chana. “When they have to do it, for example to prepare for their Bar-Mitzvah, they experience it as a boring and not very stimulating obligation.  And there are many parents who have little knowledge of the meaning of Jewish holidays and life, and therefore fail to pass on our cultural and religious heritage. We are not a "missionary" site, we do not proselytize and on the contrary, we allow parents and teachers to personalize, according to their vision, the information we provide through games.  My mission, the responsibility that I have taken on, is to train young people who are proud of their roots, of their history, and who know the rudiments of the language. It is also a way to "immunize" them against anti-Semitism".  For this reason, in addition to teaching, the site also offers training for teachers and educators in distance learning and the creative use of new technologies. 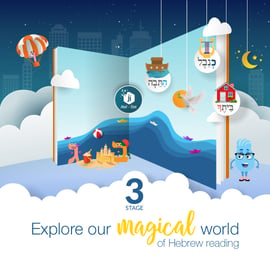