The Aishet Chayil as Zeitgeist for 2018

It’s been a year since Gal Gadot, as Wonder Woman, burst onto the big screen and the director got the right message out at the right time. Diana, Wonder Woman lived in a society, which encouraged strength and learning from your defeat. “You are stronger than you believe. You have greater powers than you know.” Antiope, Diana’s aunt and trainer bolstered her with these words.

As a result, Diana possessed a natural confidence in her abilities; there were no barriers until she reached the world of men—and then she simply ignored closed doors and said what needed to be said.

Her actions were in contrast to what educators and psychologists are discovering: bravery is taught to boys but perfection is taught to girls. Most girls can’t walk into a room like that because they feel they need to reach perfection first. There’s a gap between what we think we’re teaching, and the messages they’re receiving. They’re hearing: you need to be perfect before you can talk. It’s important to note, Diana isn’t defiant; she is just being who she is. She doesn’t need permission from others to open that door and speak her mind. 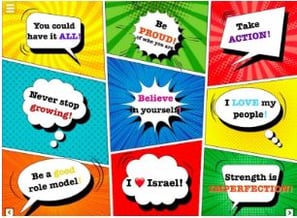 At Jewish Interactive, we believe that education doesn’t stop at the classroom door. We believe we’re presenting the perfect series at the right time, The Great Wonder Women of Israel, an interactive series by Chaykee Mor.

Chaykee explains that she chose Gal to introduce her Wonder Woman series because, Gal’s example is important. Just like Diana, Gal doesn’t shy away from using her voice and moreover, she encourages others to use theirs. In the concluding screens of the app, children are asked to ask themselves, what do they do when they see injustice? Chaykee chose a range of compassionate, strong and wise women who wielded pens, voice, and leadership to encourage children to keep asking themselves, what would they do. “Gal accepts roles that portray strong, independent women…” “Gal is a beautiful, talented woman who uses the success she worked for as a platform for advocacy, she’s a positive role model who’s never wavered in the support of her home country.” (So, not because in its original incarnation as a TV series, Wonder Woman was called Aishet Chayil on Israeli TV!) 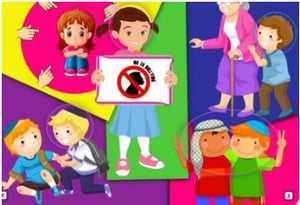 The series features former Prime Minister Golda Meir and current political role models like Pnina Tamano-Shata, Ethiopian olah, lawyer and Minister of Knesset. Your child can explore dramatic moments in Israel’s history, like Operation Moses, to understand Penina went from leader and advocate to first female, Ethiopian MK. There are brave heroines with messages in dangerous times, like Sarah Aaronson and Hannah Sennesh; Naomi Shemer, our first lady of poetry and song and then, Netta Barzilai our proud-to-be-Israeli, 2018 Eurovision winner! Our heroine is also Yael Arad our Judoka Olympic medallist; or the visionary, Henrietta Szold, a U.S. Jewish Zionist leader, founder of Hadassah Hospital and co-founder of Ihud, a party in Mandatory Palestine dedicated to a bi-national solution. A smorgasbord of wonder and go-gettery, because we believe there’s a place at the table for all our children and their talents.

Every child needs to feel heard and that they are valued. The world needs people to fight injustices, big and small, and every child has the potential to do just that.