Going Out on a Limb for Trees

It seems a little odd that we all turn tree huggers in the dead of winter, so where did all this begin? Tu Bishvat, meaning the 15th of Shevat, is mentioned in the Mishnah as an important date for Jewish farmers. Yes, its beginnings are humble and more to do with the inevitability of taxes than ecology.

The Evolution of a Calendar Date

Vayikra has the important instructions: “When you enter the land [of Israel] and plant any tree for food, you shall regard its fruit as forbidden. Three years it shall be forbidden for you, not to be eaten.”

The fruit grown in the fourth year was taken to the Temple and every year after that the farmer could sell or eat his produce. The Rabbis in the Mishnah established Tu B’shvat, as a starting point, a birthday so to speak, even if you planted your tree a month before Shevat, it would hit one year on the 15th of Shevat.

In the 16th century, the day gained a new significance. Jewish mystics who had settled in Tzfat invented a ritual for the day that involved a Seder type meal using the fruits and nuts associated with the land of Israel.

Most of them had made Aliyah from Europe, and had returned to a land where there was no way to mark the day as originally intended. But, they could still observe the day by acknowledging the bounty grown here. It was possibly a celebration of being there, coupled with the day’s historical significance. They looked forward to a day when farmers would keep the mitzvot of the land.

Some time later, early Zionists co-opted the day to plant trees; to celebrate how far they had come in the fulfillment of a dream. Trees are symbolic in that they have roots that stretch far and wide. You want to be around when the tree is tall and strong and you want your grandchildren to harvest its fruits.

Planting trees is a huge part of the Jewish and Israeli zeitgeist. When Jews were supporting Israel financially they were prioritized trees and dedicated trees and forests to loved ones. As if to say, we want a stake in developing Israel in ways that will change the panorama for generations.

That echoes the Talmudic story of an emperor who encountered an elderly man planting a tree in the desert. The emperor paused and asked,  “Old man, why are you planting these seeds when you will never see nor taste the fruits of your labor?”

The old man replied, “I eat the fruit and take shelter from the trees of my grandfathers. So, I plant these trees for my grandchildren’s survival.”

That’s the legacy of the Zionist Tu B’Shvat too: earthy, strong and grounded. They changed the landscape.  They made the desert bloom. They repopulated the land, beat back the swamps and made Israel fertile again. They made it green.

That segues nicely into a modern celebration of Tu B’shvat; keeping the world and Israel green and ecologically sound, encouraging sustainable practices so we can ensure a better world for our grandchildren.


There’s really no obligation to do anything for Tu B’shvat but with all this context, whether eating, planting or resolving to recycle more, this day that was just a date is the epitome of a modern Jewish earth day. It’s diverse in its festivities but rooted in text and customs that children can learn about through play. 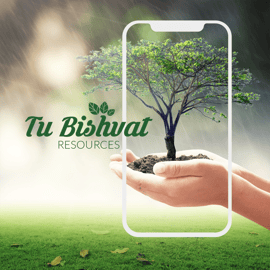