While everyone is familiar with the primary Jewish New Year of Rosh Hashanah, many don’t know that the Jewish calendar has a second year called the New Year of Trees. This minor holiday, which falls on the 15th of the Hebrew month of Shvat, or Tu Bishvat (some say Tu B'Shvat), was revived in modern times as Jewish people returned to cultivate the Jewish Homeland. In fact, as an annual tradition, all Israeli school children are taken out to the fields to plant trees. On this holiday we give thanks for renewal of nature and remember the necessity of caring for the beautiful world, which the Almighty has created for us.

Tu B’shvat is also an excellent time for your children to learn about nature and agriculture in Hebrew, thereby connecting them to both Jewish heritage and mother earth. Let’s take a look at a few great games that your children can download from Ji Tap in preparation for the holiday.

A series of 7 units about Tu BiShvat. Your children can learn, amongst other topics,  about the seven species and the parts of a tree in Hebrew. 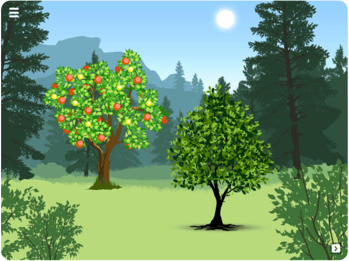 This game consists of a short video, which explains the meaning of Tu B’shvat and goes on to reveal the seven types of species that are native to the land of Israel. On the holiday of Tu B'shvat, it has become traditional to eat the species of Israel, including: Barley, Wheat, Pomegranate, Figs, Grapes, Dates and Olives. As the player clicks on the picture of each of the species, they will learn how to pronounce them in Hebrew.

Fun Fact: In the 16th Century, a Kabbalistic Rabbi named Rabbi Yitzchak Luria began the custom of holding the Tu B'shvat Seder, where the seven species are eaten and wine is drunk similar to the Passover Seder, bringing more greater meaning to the Holiday. Try it this year!

This game not only teaches the player how to pronounce the seven species in Hebrew, but teaches about the biblical origins connected these species to the Land of Israel. As the game progresses the player will be challenged to choose the right objects to recycle from among the rubbish, cleaning up after a fun day at the beach and other ways to and exploring other ways of protecting our environment. 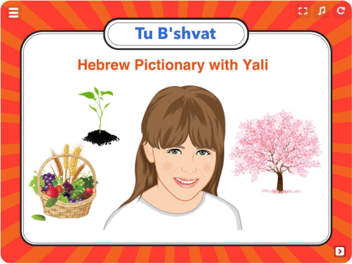 Our popular guide Yali is back for Tu B’Shvat and ready to teach us about many words and concept related to the holiday. First, the player clicks on a number of pictures like the watering of a plant, a child digging and planting or a basket of fruits and grain. As the player selects an image, Yali will teach how to pounce the action or item in Hebrew.  In the second stage of the game, Yali pronounces the Hebrew words learned in the first segment, and the player is tasked with clicking on the corresponding picture.